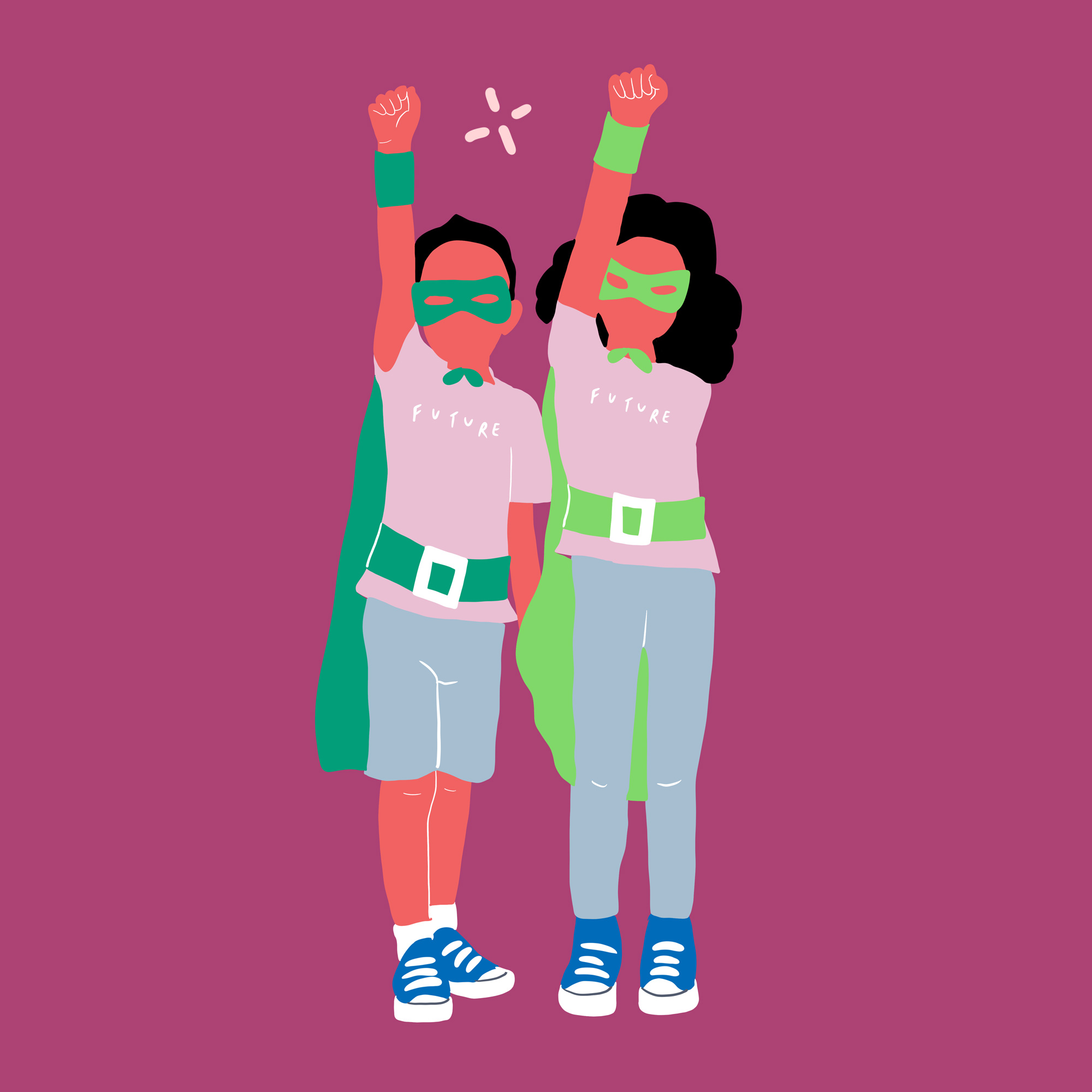 Trying to bring up children sugar-free isn’t easy. Let’s talk about the challenges of this decision and the reasons it’s so important.

It’s hard to escape it. It feels like it’s everywhere you go: at parties, at school, at nursery, on playdates and with grandparents. The sugar epidemic facing our children has reached fever pitch and trying to avoid it is becoming increasingly difficult. My obsession with restricting sugar for my two children was never a pre-planned parenting decision. It came from the core of my mothering mantra: to make decisions based on how I lead my own life. This way of parenting started as soon as my children were born. It’s quite simple really: when they couldn’t tell me what they wanted or needed, I would ask myself “what would I need or want in their situation?” I took it back to basics: some milk when they woke up, just like we like to have a drink when we wake up; more layers when it’s cold because I hate to feel cold; thinking if I’m uncomfortable with the heat in summer. All this explains why I didn’t want my children to develop their earliest food tastes around chocolate and sweets, because neither Ben, my husband, nor I really eat sugary snacks. In fact, we don’t even have fizzy drinks in the house (apart from tonic and sparkling water). It’s not because we abstain from sugar, it’s just that we don’t eat that way and haven’t for a long time. We’re not anti-sugar fanatics but it’s a polarising subject among parents and child carers. When Sebastian first started nursery, there were a few incidents at lunchtime when the pudding was not the fruit or sugar-free alternative we had requested. When we did mention it, despite us telling the nursery that we didn’t want Sebastian to have sugar because we didn’t have it at home, it was as if we were notifying them for the first time. Unlike allergies, which are taken seriously for obvious reasons, asking to be sugar-free wasn’t taken seriously. Of course it’s not a matter of life or death like an allergy can be, but it is a matter of futureproofing your child’s health. As someone who had a sugar-restricted childhood myself (not by choice: I went to boarding school from nine years old and sweets were not allowed, despite my sister’s best efforts to post them to me in hollowed about books), I do believe the fact I didn’t develop a taste for sugar early on has helped me be more mindful of the issue as an adult.

I didn’t quite realise how hard it would be to live a sugar-free life. In fact, you can’t. When I say sugar-free, Sebastian and Sybil both have fruit and raisins and copious amounts of Goodies snack bars, which have natural fruit sugars in them – we’re not that mean! They also enjoy daddy’s shakes after football, which are packed with bananas, dates and oat milk. What we try to avoid is refined sugar, which seems to be hidden in all sorts of innocent things like bread (yes, check the packaging), Weetabix (I know!), children’s vitamins and pretty much most ready-made food products. We’ve become those people in supermarkets who look at the ingredients on the back of everything and try and avoid anything where sugar is listed as the first ingredient. You’d be surprised how often it’s the case. And this is what we mean about being mindful of sugar, because you can’t avoid it completely.

The health of our children’s teeth has been a huge contributing factor in trying to keep them sugar-free. Research developed by electrical toothbrush brand FOREO revealed that 55% of three to five year olds have already had a filling, putting their oral health at risk. With a combination of poor brushing and sugar-filled diets, basic body functions like teeth have no chance.

Being in the minority has its moments. This became particularly clear after a day at a school holiday camp that proved slightly embarrassing. On collecting Sebastian, I was approached by the camp leader who asked whether my child was diabetic. Confused, I replied, “No! Is he ok? Did he say something?” The camp leader explained, “It’s just he said he wasn’t allowed sugar”. I was mortified but also weirdly proud. Proud that he had made the decision not to eat the sugar that had been offered on tap; but also a bit concerned at that phrase, not being allowed, which is an admission of a restriction, a rule. I felt bad that my son had been put in this position, that we had made him the minority. I felt sad that he used the phrase “not allowed” rather than “no, thank you”. It was at this point that we became more mindful of sugar, because avoiding it altogether as they grow older is tough.

As birthday parties for classmates become a regular weekend event, the “no cake” rule is harder to enforce. Instead, a bite of cake just for a taste has proved sufficient. I think the biggest part for Sebastian and Sybil is feeling included, joining in the birthday cake ritual. One long, lingering, satisfying taste and they’re content. I’ve found this doesn’t cause the sugar rush, but keeps them in the sugar gang. All smiles, no tantrums. A sugar tease without the meltdown. I don’t want to come across as smug, but I feel like we’ve hit a happy medium. As the sugar hit highs kick-in, it’s not long until the lows do too, with the tears and tantrums not far behind. I’m thankful we haven’t experienced that yet.

When it comes to our children’s birthdays, we make sugar-free cake alternatives with honey, bananas or dates. We’re lucky our family have accepted our sugar-free approach to bringing up our children and bake accordingly. While many people say it won’t taste the same, everyone is always pleasantly surprised and there’s usually no cake left over. We also hope that we’re encouraging a more mindful approach to eating, despite the innocent teasing we get!

Government recommendations confirm our sugar concerns. Children under four are not recommended to have any food or drinks with added sugar. Literally none. Likewise, children aged between four and six are recommended to have no more than five cubes of sugar a day (19g of sugar added to food and drinks). This sounds like a lot to me and makes me wonder whether these recommendations reflect the fact that children are already having too much by this point. I’m not sure when sugar became a rite of passage for children, but it’s definitely something that even Sebastian and Sybil’s great-grandparents can’t fathom: “We used to use sugar to soothe babies. We’d wrap it in a muslin cloth and let them suck on it.” It’s so deep-set in our culture that it’s no wonder the message isn’t getting through.

I do want to be clear that it’s not a weight issue for us. It’s purely from a health perspective that we feel so strongly that our children should at least have a chance to not become dependent on the sweet stuff. We want to keep those taste buds as pure and sharp as we can until it’s up to them to decide what they eat. Some people think we’re setting ourselves up for a rebellion, warning us that when they hit their teens they’ll go sugar crazy and binge on the stuff. I hope our children don’t feel the need to do that and respect themselves enough not to overindulge on junk food. Of course they’ll have more of it and it’ll be out of our hands, but all we can hope for is that we’ve put them in a good position to make the right decisions for themselves.

The biggest question though is whether they feel they are missing out. While sadly I do feel they miss the feeling of being included as part of something that is everywhere, it seems that sneaking them a bite of birthday cake from the dreaded party bag is just enough. Until the next birthday at least. A much deserved and longed-for ice cream on holidays has earned enough sugar credits until the next holiday, with no pleading for another. Just a memory of that day on a family holiday and that’s good enough for me.

Email
No comments yet
← PREVIOUS POST
DISCOVERING INDIA... WITH THE KIDS!
NEXT POST →
“THE WORRIES” BOOK LAUNCHES FOR BACK TO SCHOOL