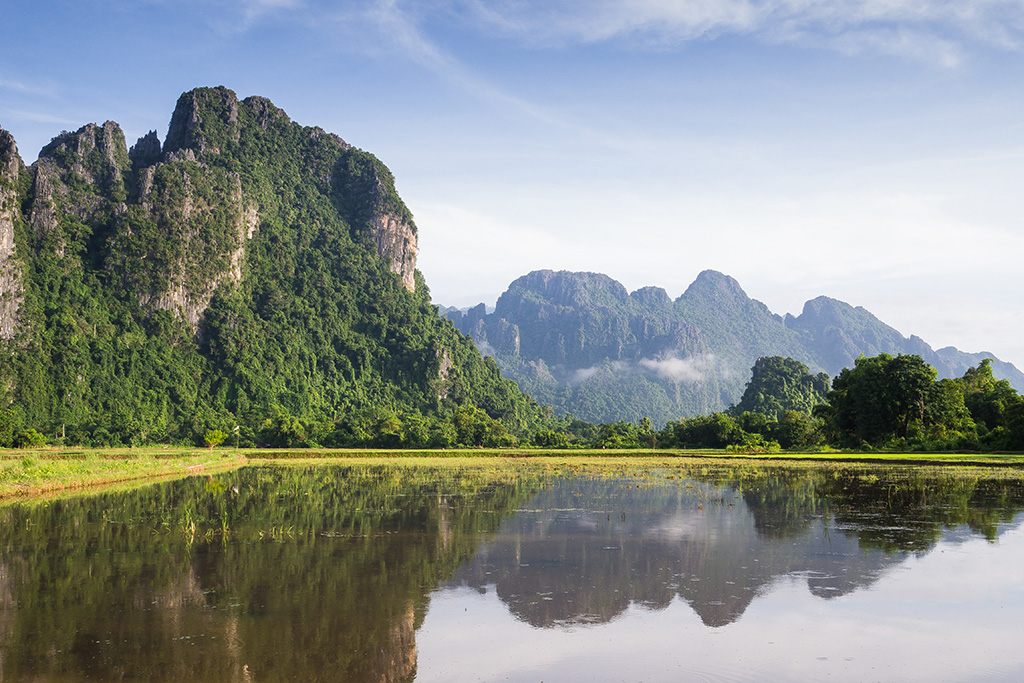 DISCOVERING LAOS WITH THE KIDS

The words “Southeast Asia” are music to the ears of almost all lovers of travel and Laos is a relatively undiscovered pearl in that sense. Laos can be the ideal stage for a vacation off the beaten path, even with kids.

While this country is completely land-locked, it has enough rivers to make it a major producer of electricity in the region. It rains non-stop from May to October, and March and April are very hot and dry months. The cool season is between November and February and this is the best time to go.

To embark on this trip, you will need a valid passport. A visa is required and can be obtained almost instantly on arrival at the airport. The hardest thing is getting there. There are no direct flights between Portugal and Laos, so there are two things you can’t avoid: stopovers and many hours travelling with your youngest.

As for the language barrier, there’s nothing to fear: the main language is Laotian, but French and English are also spoken.

Luang Prabang
This city has been a UNESCO world heritage site since 1995 and has a very developed tourism sector. It still preserves more traditional customs, however, like Tak Bat. Every day at five in the morning, Buddhist monks of all ages leave the temples and organise themselves in lines to walk the streets of the city in search of food donations.

The night market on Sisavangvong Road, one of the main streets of Luang Prabang, is one of the most beautiful markets in Southeast Asia. It is not far from the highest point of the city, Mount Phousi. Those who climb Mount Phousi can enjoy a magnificent view of the city and of the two rivers that meet alongside it: the Nam Khan and the Mekong. The river banks are the best place to see the sunset in Laos and, according to some that have been there, the Utopia Bar is the best spot to enjoy it.

The town has no shortage of Buddhist temples. The architecturally rich Wat Xieng Thong is set in a garden, Wat Mai is the largest in town and has a giant statue of Buddha inside and Wat Phra Mahathat is one of the most attractive monuments in Laos. 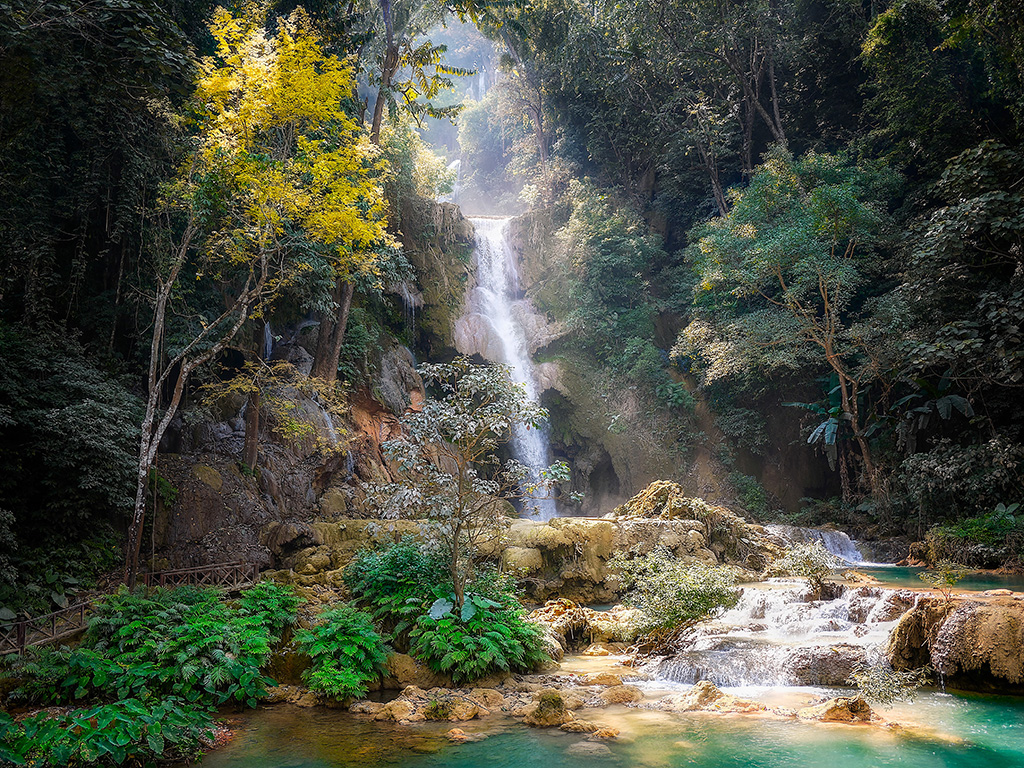 Vang Vieng
A little further south, on the banks of the Nam Song River, lies Vang Vieng, a rural town surrounded by mountains and rice paddies, which has already suffered a lot from tourists. With the arrival of river sports, the city began to receive more tourists than it could handle. For this reason, the government was forced to take measures to prohibit some river activities. Still, those who visit the city can enjoy the best that Nam Song has to offer. Both kids and adults can enjoy the various river activities available, such as kayaking and tubing.

But there’s a lot more to do. The Walking Street market can only be visited at night and is a must. Another thing you can’t miss is going to the top of Pha Hon Kham, a cliff with a view over this incredible city. Anyone who wants to experience Vang Vieng without too much walking can also venture out on a hot air balloon ride. And for those who like to ride a bike, we recommend taking a rental to the Blue Lagoon and the Tham Poukham cave, which has a bronze Buddha inside.

Vientiane
This is the capital of Laos and preserves a French influence from the colonial era in its architecture and gastronomy. It’s mostly a cultural city and there is a lot to see. Pha That Luang is one of the many Buddhist temples in the capital. Having been destroyed and rebuilt several times as a result of the successive invasions the country has suffered, it is the most important monument in Laos and a national symbol. Less frequented by tourists, Wat Si Muang is a place of worship for Laotians. It was built in 1563 as a tribute to a young pregnant woman who was sacrificed there. Not to be missed is Vientiane’s own arc de triomphe, Patuxai. It took 11 years to build and offers a fantastic panoramic view of the city. Another attraction in the capital is the bridge which connects Laos to Thailand. The Thai-Lao friendship bridge was built in the 1990s and was the first to connect the two countries. 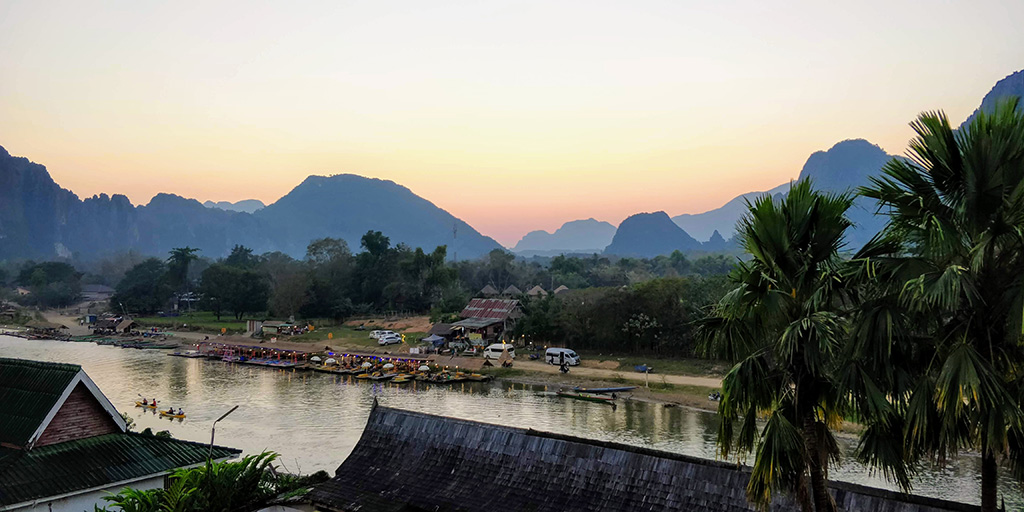 Kuang Si Falls
These waterfalls are a trademark of the country and are an hour’s drive from Luang Prabang.  The scenery on the journey is worth the trip itself, as of course is the final destination: 60 metres of crystal clear waterfalls. After enjoying the view, tourists can refresh themselves in pools and small waterfalls scattered throughout the park, where an Asian black bear sanctuary has been built to make tourists aware of the illegal poaching which threatens this species.

Si Phan Don
In the southernmost part of Laos, on the Cambodian border, is Si Phan Don. This archipelago is known for its 4000 islands, many of which are submerged when the Mekong River floods. From here you can see the famous Irrawaddy dolphins, which live in estuaries and rivers in the Gulf of Bengal and Southeast Asia. The best times to see them are in the early morning and at dusk. On Don Khon, one of the islands of this archipelago, you can visit the Khon Phapheng Falls, which are the largest in the area.

The Gibbon Experience
True lovers of nature can find what they seek near the border with Thailand. As the name suggests, this experience offers tourists the chance to sleep in tree houses in Nam Kan National Park to observe the natural life of gibbons. The Classic Pack includes three days and two nights and is priced at €305 per person, with kids up to 12 only paying €152.50. For safety reasons, children under the age of eight are not allowed.

Email
No comments yet
← PREVIOUS POST
QUARANTINE DIARY WITH... CATARINA MACEDO FERREIRA
NEXT POST →
ISABELI FONTANA, FROM MOTHERHOOD TO A CAREER AS A SUPERMODEL

DISCOVERING LAOS WITH THE KIDS - My Lemon Magazine