AN ADVENTURE IN THE BRAZILIAN AMAZON 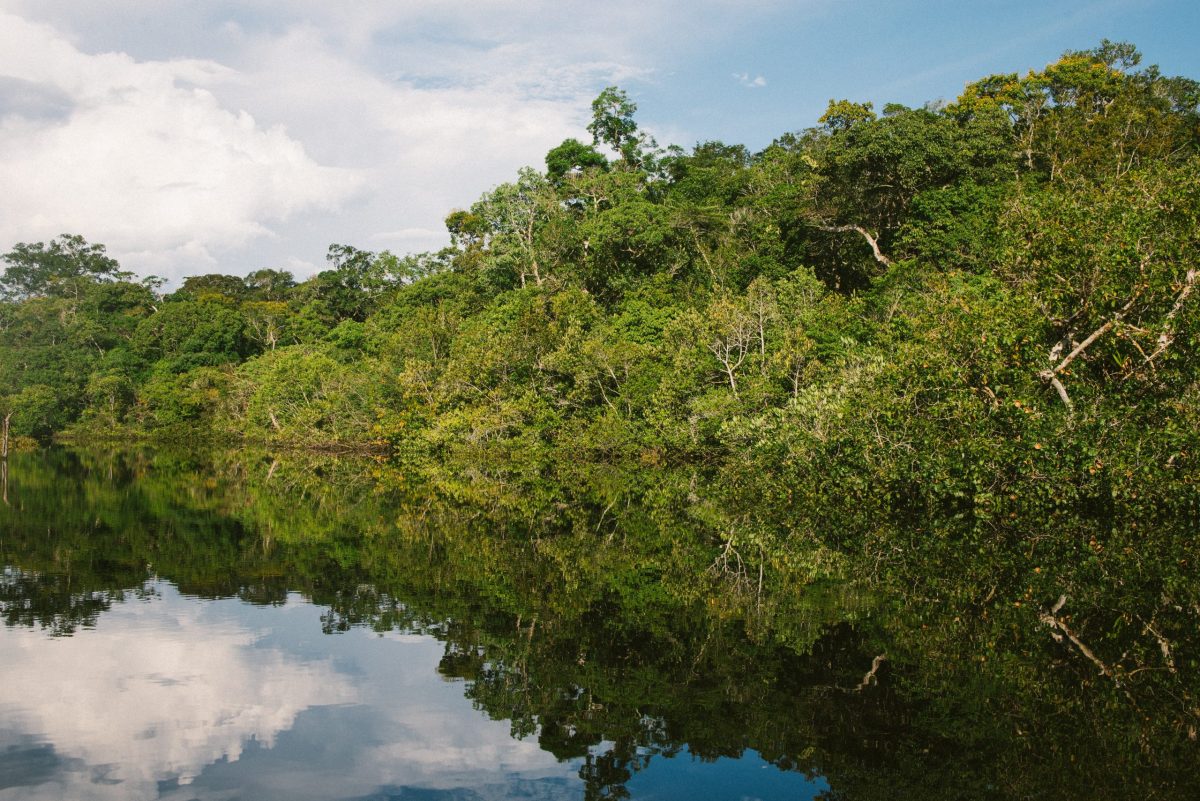 AN ADVENTURE IN THE BRAZILIAN AMAZON

The Amazon rainforest may not be the first destination that comes to mind when we think of holidays with our children that’s for sure, but LEMON Mag guarantees that it’s an absolutely unforgettable experience for everyone.

The Amazon is the largest tropical forest in the world, covering more than five million square kilometres. The state of Amazonas in Brazil is home to most of its area, but the forest reaches out into eight other countries in South America: Bolivia, Colombia, Venezuela, Ecuador, Peru, Suriname, Guyana and French Guiana. It is crossed by thousands of rivers, but the most famous is the Amazon, which is over 6,000 kilometres long and has thousands of tributaries. With an extremely rich biodiversity, it is estimated that there are around 2500 species of trees and 30,000 species of plants in the Amazon, while new animal species are discovered every day. This forest also absorbs huge amounts of carbon dioxide while producing oxygen and more water evaporates from the forest than from the entire Atlantic Ocean. It is the Amazon’s unique natural wealth that makes it an important global climate regulator and which is a cause of such concern. In recent years, the forest has lost almost 20% of its original area. 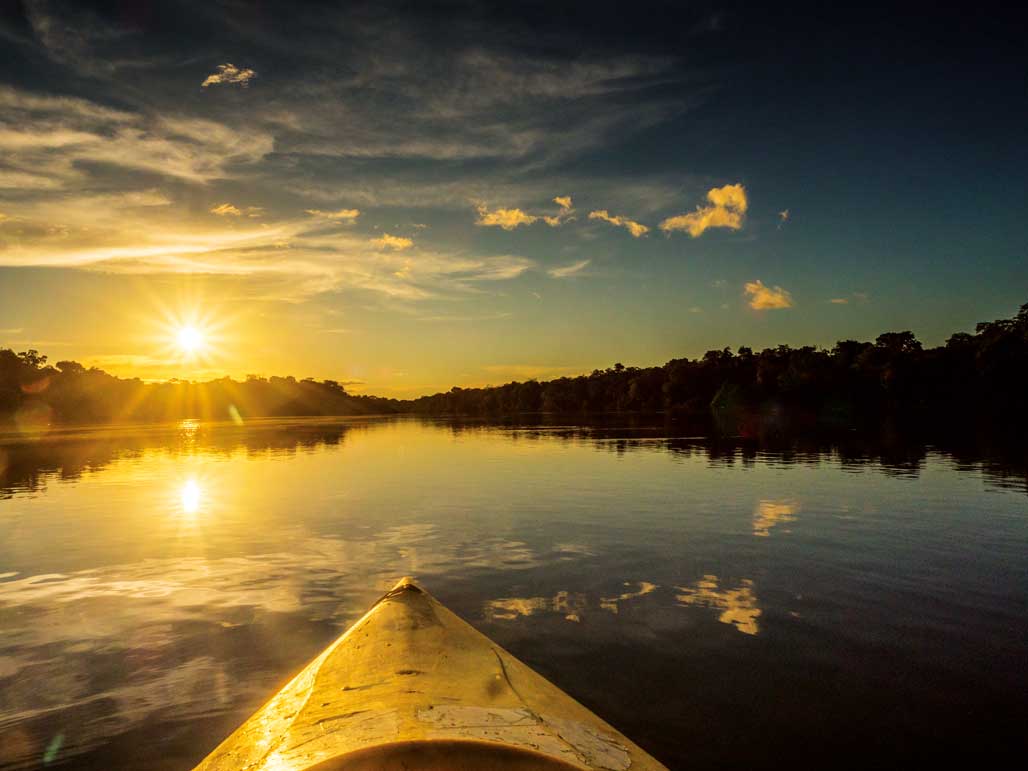 HOW TO GET THERE

To enter Brazil, Portuguese citizens need a passport that is valid for six months or more, but are exempt from visas for visits of up to 90 days. To visit the Brazilian Amazon, the best option is to fly to Manaus, the capital of the state of Amazonas, considered by many to be the door to the forest. There are no direct flights from Portugal, so the trip involves at least one stopover. The airport is 14 kilometres from the city centre and the journey can be made by taxi or bus.

In Manaus, Ponta Negra beach, the Teatro Amazonas, one of the most important theatres in Brazil, and the old historical city centre are some of the highlights not to be missed. But without a doubt, the best thing about this city is its proximity to the forest.

There are several jungle hotels located inside the natural forest itself, providing guests with a totally ‘raw’ experience. These hotels offer transportation for their guests from and to Manaus and/or the airport by land and river, but it is always possible to hire a private transportation service.

In this region, the days are hot and humid and there is always a (strong) possibility of rain. There is not really a best period to visit the forest, but it is important to understand what kind of landscape you prefer. The rivers are fuller between March and August and lower between September and February, and the scenery changes completely. At the peak of the floods in July, the water level rises up to 15 metres and it is possible to sail at the height of the treetops! 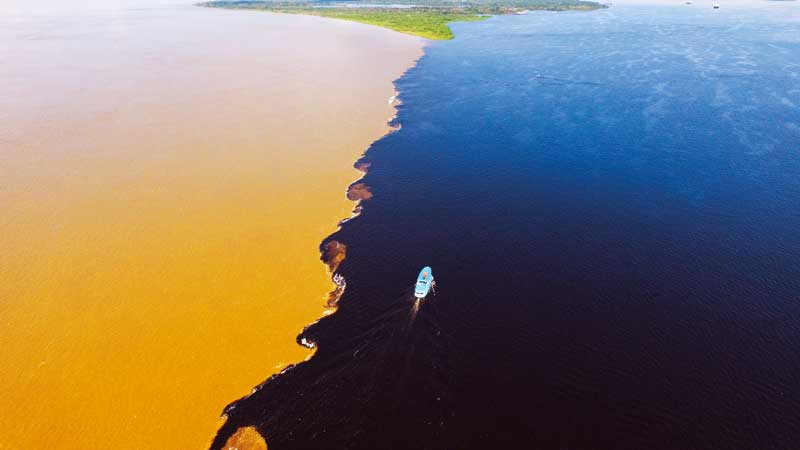 NOT TO BE MISSED!

The jungle hotels offer many activities and excursions to experience the forest, usually included in the package of your stay. All activities are properly accompanied by guides to ensure safety.

Sunrise in the forest
Anyone who’s seen the sunrise in the Amazon rainforest can tell you just how breath-taking it is. This very special sunrise bathes the sky in a huge range of colours, creating a magical backdrop for photos. We recommend not leaving your camera in your room.

Canoe rides
Canoeing in the Amazon is done in the more traditional way, rowing through the forest’s igapós (permanently flooded areas) and igarapés (shallow and narrow streams). During the ride, tourists can enjoy the landscape, swim and, with some luck, see the adorable pink dolphins, the largest freshwater dolphins in the world.

Night hikes
Experiencing the forest at night, illuminated by the moon and the stars in search of animals in their habitat seems like a dream, we know. But in the middle of the Amazon rainforest, this dream becomes very real. The night hikes organised by the hotels are a completely unique experience. Animals make more sound during the night, and the forest seems even more mysterious.

Getting to know the local communities
Whoever visits the Amazon can’t leave without meeting the indigenous people. After all, the forest is theirs. Tourists leave the hotel in a canoe and are taken to riverside villages, where they will learn what the natives’ lives are like, about local routines and practices, and about how the famous cassava flour is made, the production of which is one of the main economic activities in the region.

Juma Amazon Lodge
This hotel is located on the banks of the Juma River, 100 kilometres from Manaus. The bungalows are located in the tree tops and built with materials taken from the forest. A river pool, a redário – a resting place with several hammocks – and a museum are just some of the attractions of this jungle hotel.
Price per night: Triple rooms for two adults and two children, with all meals included, from €1257.36.

Amazon Ecopark Lodge
Amazon Ecopark Lodge is located on the Tarumã River, a tributary of the Negro River, less than one hour from Manaus airport and downtown area. The lodge is fully integrated in the jungle and has a private river beach, natural pools and resting areas with views that will blow your mind.
Price per night: Superior triple rooms for two adults and two children, with all meals included, from €1118.20.

Anavilhanas Lodge
This hotel is located in Anavilhanas, the largest river archipelago in the world, with 400 islands. A true paradise, Anavilhanas Lodge is just under 200 kilometres from Manaus, the capital of Amazonas, and located on the banks of the Negro River. Those who stay there can enjoy the pool overlooking the river and the other islands of the archipelago and take incredible pictures from the hotel’s 13-metre lookout point.
Price per night: available upon request.

AN ADVENTURE IN THE BRAZILIAN AMAZON - My Lemon Magazine